The principle of operation is that by varying the pitch of the windings it should be possible to obtain multiple resonances or improved efficiency on lower frequency bands of operation relative to unloaded wire.

It may be possible to obtain multiple resonances by creating trapped helical either by interwinding capacitance or by adding capacitive loading or patches to closely wound section of helix, however the operating bandwidth is likely to be very narrow.

Both types of antenna use a similar style of construction, but would seem to operate in a subtly different manner.

I have major doubts about the efficiency of this antenna, as the construction technique is likely to introduce large resistive losses in the windings, and dielectric loss in the GRP support pole.

The suggested use of a 9:1 Unun is also of concern, as I believe that this will also introduce national losses which will mask the true impedance presented by the antenna to the transceiver. I estimate that the total antenna gain is likely to be in the region of 10 to 16db relative to that of a ¼ wave vertical.

However it may be possible to apply variable pitch helical loading to a larger vertical antenna, especially when used in conjunction with an auto-atu. The choking effect of the wound sections could reduce the active length of the antenna at the higher frequencies, whilst improving the efficiency at lower frequencies.

And here is the impedance plot when fed against 16 buried radials (No 9:1 Unun) 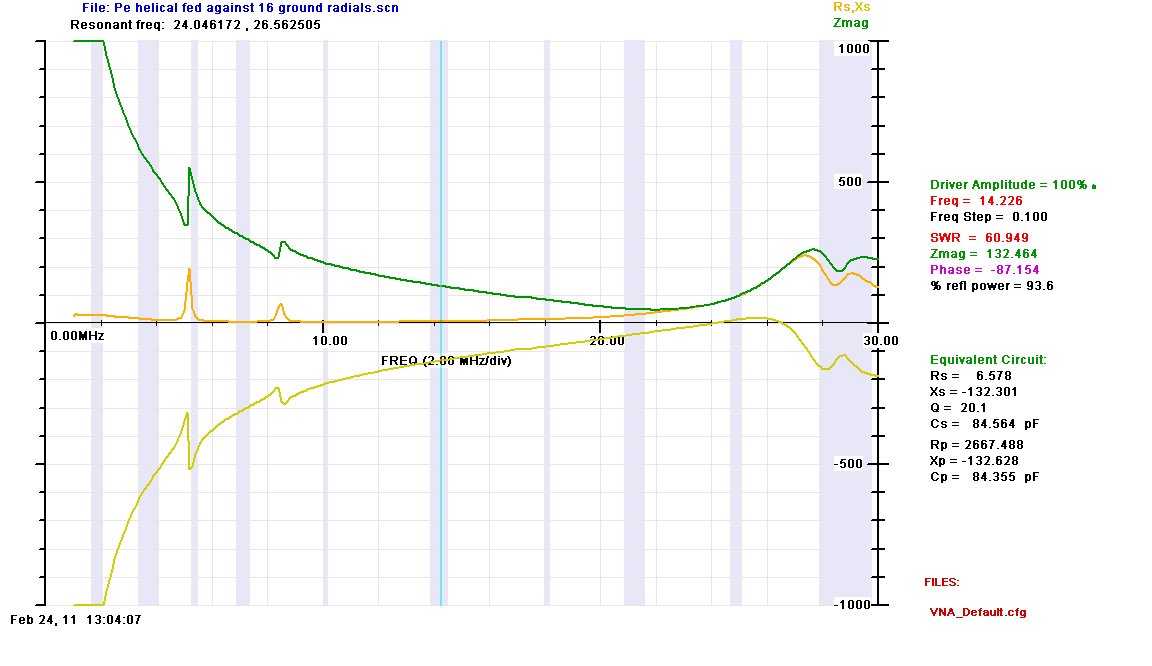 So rather than having multiple resonances as I first thought it actually has none - or at least only very small ones !

The special winding technique reminds me of a valve PA anode choke, which is designed not to have self-resonance on any band.

However it's still a mystery to me how a 9:1 Unun improves the match, other than by introducing additional losses into the antenna system.

The Chameleon antenna would seem to be constructed in a slightly different manner. As the Impedance plots produced by Array Solutions indicate a resonance at around 3.6MHz. However I'm still slightly worried about the very flat SWR curve and values of Rs, which would tend to indicate to me that there was a fair amount of resistive loss present in the system.

Carl from Chameleon antenna has commented as follows:-

Several hundreds of those antennas have been sold during the last few years around the world. They're used by the Military Auxiliary Radio System (MARS), Amateur Radio Disaster Services (ARES) and American Red Cross just to name few in the United States. They have also been used by the Haiti and New Zealand earthquakes rescue teams and countless ham operators around the world. The Chameleon Antenna are compromise antennas and they need to be used accordingly to the situations and needs.

Last year and before being announced on their website the engineers from Array Solutions (http://www.arraysolutions.com) have studied the Chameleon V1 Antenna.

The following are their results:

On the following example they used the included 4 counterpoise wires supplied with the kit with the UNUN. The antenna was grounded on a grassy area. It is important to notice that the counterpoise wasn't hanging down but was kept straight with a nice tension provided by the tent stake. Trying to keep the counterpoise as high as possible from the ground will make a difference on the results. Here they used the tripod at about 40 inches off ground and the wires sloped down to the ground using the supplied stakes to anchor them.

The following plots were made with an AIM 4170C. First plot is from 3.5 to 15.5 MHz. Note VSWR in 75m band is very acceptable for most radios with auto tuner, VSWR is the red line, R is the orange line and X is the greenish line. Return loss is shown in blue.

Next sweep is from 14 to 30 Mhz VSWR is very low (red line) As you can tell this antenna system will work with just about any portable/mobile radio with a built in tuner.

Ive now got a V1 and have played with it for a while.

The basic principle is an 8ft long wire radiating element, which is linearly loaded on the LF bands by means of a helical winding. This makes it sort of resonant on 80m (which is subtly different from the DG7PE antenna). The linear loading coil is bunched into separate sections so that it doesnt have self-resonances on any other bands. When used in conjunction with the supplied 9:1 Unun (Ruthroff type wound on type 2 Iron powder core). It has sufficiently moderate feed impedance, that it can be used on most of the amateur bands, in conjunction with a coax feed and 3:1 max type ATU (as built into in many current transceivers). Alternatively an LDG Z11Pro is suggested by Chameleon. When used with an ATU and ground mounted, performance is very similar to the Yaesu ATS 100 screwdriver antenna. On 3.6MHz and 7MHz the single band hamstick antennas are much more efficient.

Inside the Chameleon 9:1 Unun. Note that the secondary side of the transformer only has one connection to the centre pin of the socket (marked with a red band).

In the broadband configuration. The antenna is mounted on top of an 8ft high tripod (not supplied). The antenna mounting bracket has a 9:1 Unun mounted below it and four sloping radial wires connected to the bracket. The radial wires are connected to ground at their ends by means of 6 metal tent pegs. Which also help to support the tripod and antenna. Each ground peg provides approximately 150 Ohms of ground resistance.  The 9:1 Unun (Ruthroff Unun wound on type 2 Iron powder material) does not a have the ground side of the secondary connected to the plug. So the radial wires act as passively coupled radiators. The antenna is supplied with two clip on ferrite coke sleeves. Which are intended to be mounted on the coax just below the Unun. In order to reduce any common mode current on the outer of the coaxial cable. The two clip on ferrites provide about 50 Ohms of resistive choking impedance.  However the antenna needs the outer of the coax to work as a counterpoise (as the counterpoise wires are not connected to the Unun). So the clip on ferrite chokes actually operate as a resistive load. Which help to mask any severe impedance excursions which may otherwise occur. The broadband match is therefore achieved my means of distributed resistive losses in the system.

I measured the radiated field strength from the antenna. By means of a test transmitter, calibrated power meter and remotely operated spectrum analyser and active antenna. Repeatability of measurements is within about +/-1dB.

When operated in the broad band configuration. The antenna efficiency is quite low. I compared it to a ground mounted Comet CHA-250 broadband antenna. Which about the same overall height as the V1 on a tripod mount. The performance of both antennas was about the same.

When the V1 is used as a ground or vehicle mounted antenna. Where it is fed against some sort of counterpoise or radial system. Using the supplied 9:1 Unun and a Z11 Pro auto atu at the base of the antenna. The performance on the HF bands on 14MHz through to 50 MHz is comparable to a similar sized Hamstick type antenna mounted in the same position... On 80m the performance is about 10dB worse than a Hamstick, and on 40m it is about 6dB worse than a Hamstick. I have repeated these measurements several times and consistently get the same results.
Interestingly Chameleon have just released the Hybrid series which would appear to be an attractively packaged 9:1 Unun and radiating element. I would assume that this is of similar design to the 9:1 Unun used with the V1 and other antennas in the series as it would appear to be interchangeable with the earlier versions.

I have no affiliation with Chameleon, but I have previously discussed my findings with Carl, in order to ensure that my V1 was working as it should be. Their customer service is extremely good, and the products fill a void in the market place. Especially for folks who want an off the shelf compact solution to solve specific problems. There are more efficient and cost effective antennas out there. But I suspect that most folks, who use the Chameleon antenna, do not have many other alternatives, or anything else they can use as a reference.

So to summarise. On the HF bands it works about as well as a similar length of wire fed via a 9:1 Unun. On the LF bands it performs worse than a conventionally loaded antenna of similar size e.g. a Hamstick.

Ive since tried copying the design using pound shop fishing poles and have got reasonably similar results. I've also bought a selection of second hand hamstick type antennas for a few pounds. Which Im going to strip down and rewind to see if I can obtain better results.

All content is made freely available for personal use only. Please acknowledge the author if content is used elsewhere or contact me if you wish to make commercial use of any material. © G8JNJ 2007 to 2023